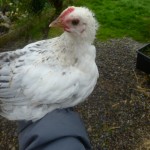 I received a phone call from a lady who asked if I was able to look after a Cockerel chick for a week , whilst she was on holiday. As it was only a chick I agreed.

They arrived and I was introduced to Colin. I took the chick and then watched, somewhat amazed, as the lady unloaded Colin’s luggage. First, a safe enclosure for him, which was great. Next, a large box with his food, shavings and hay. But then, and this is what left me at a loss for words, ( some might say at last ) another large box with his blankets and a tiny hot water bottle for him. Apparently Colin would only sleep if he was covered in his blanket. I immediately thought of Mrs Pumphrey and Tricky Woo from the series All creatures great and small. At this point I was still trying to recover my power of speech and felt a coffee might help. Whilst we stopped for this, the lady told me how she had acquired Colin.

Colin had been found on his own in a field the lady had been camping in, so she literally saved his life. He then spent 3 weeks with her by which time this lady was well and truly his Mum. He didn’t like to be away from her.

I put Colin in the shed my disabled hens go into at night but he was not happy with hens as company. It was very warm in the shed and he didn’t need extra heat but I found myself filling his hot water bottle and then , whilst muttering to myself that I couldn’t believe I was doing this, covered him with his blanket ! and he settled !!

The following day it became evident very quickly that Colin didn’t think he was a bird. He was frightened of the 3 hens I had put him with and was desperate to follow me, in fact it was a work of art to get out of the enclosure without him. He was like the road runner. He was really lost and I kept a close eye on him.

The following day he did something which I found disturbing, he attacked the Crows that had come down to eat the leftover crumbs. This tiny chick had no social skills with either his own or other species.

In the meantime a hen that had previously come in to me, after being starved and abused, had hurt her leg, so I  moved her into the enclosure where Colin was. The following day I was watching Colin, and when the Crows came he tried to attack one again, and this hen got between him and the bird. I thought it was coincidence but she did this when ever Colin launched his attacks, which he also did towards the Pigeons. She literally took him under her wing and that night , when I went out to switch the light off, Colin was snuggled into her.

Colin seemed much more settled and they spent all their time together, but then, unfortunately, his new Mum had some sort of stroke and sadly she died yesterday. This dear little hen had been the turning point for Colin. He was very unsettled but happily has now attached himself to another hen and I am confident, one day, he will be able to join the others and have the pleasure of the fields and new friends. I refer to Colin as a he but think he may well be a she.

During this time the lady decided that, because of her busy lifestyle, it would be kinder to let Colin stay at the sanctuary and learn to be a chicken. However Colin is a very lucky bird to have been found by this very kind lady, who gave him the gift of life.

For my great friends that care and support